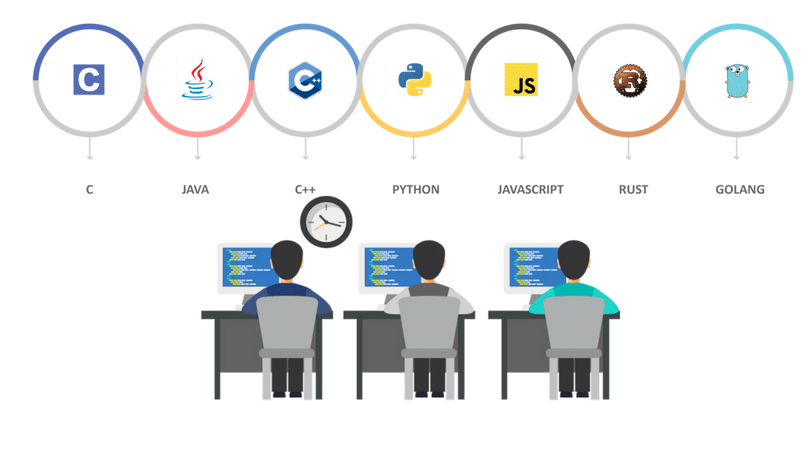 Development is an ever-upgrading area to work in. Global involvement and changing market demands have resulted in the plethora of programming languages, arrayed to confuse the new learners. You may find students asking the queries, like:

Best Programming Languages to Learn in 2018

All in all, it’s a great puzzle to solve and select the best language to learn among hundreds. However, we’ve jotted down the evens and odds of 11 best programming languages, which will pay highest and will remain in great demand during 2018. Pick as per your career choices:

Scala is surely the best general purpose programming language that supports the functional programming as well as imperative programming approach. Its scalability, real-time processing powers, object-oriented nature and data-handling capacity has made it the favorite of developers and IT market. It can synchronize perfectly with Java and Haskell as it runs fine on JVM.

Who Should Learn Scala?

Scala is frequently used to design Web applications, Data streaming with Akka, Parallel batch processing, Concurrency and distributed application, Data analysis with Spark, AWS and Ad hoc scripting in REPL. Programming enthusiasts, having interest in these areas and willing for high salary packages (Off Course!) should put their efforts in enriching Scala Knowledge and Skills.

As Data is the fuel of 21st Century, R has become lingua franca of data science. It is currently facing rising demands, which indicates that future is brighter. It is a free open-source statistical programming language. That is why it is most commonly used by statisticians and data miners. R is supported by general public license and its source code is written in C and FORTRAN. It’s highly complex problem-solving capacity makes it admirable.

Who Should Learn R?

R is highly demanded among data scientists. If you are thinking to become an excellent data analyst and developer, you can opt learning ‘R’. This language is having a wide scope of application in industrial sectors as well as in academic sector. It’s great data analyzing capacity make its useful in stats and data analysis. As it supports 3D graphics and unique data visualization features, it is going to bring you countless opportunities.

C is the mother of all programming languages and the craze for learning this language is constantly-hiking. The cause? Well, it still promises amazing salaries and is still considered the first ladder to learn to programme.

C is used for writing operating systems and inventory of other languages like UNIX, Perl, PHP, Ruby. C is strongly preferred in applications where performance matters. Where high-level languages can slow down the performance, C works smooth.

Who Should Learn C?

For everyone, who is willing to get into hardware coding or embedded system, there is no better choice than C. C finds major applications in Open source Application software, system programming, optimization techniques, networking, evaluating mathematical equations, designing compilers, database, spreadsheets, computer and mobile games etc.

Who Should Learn C++?

C++ is a highly scalable and user- friendly language. It would be a great choice for beginners to learn it as it is very much similar to C. And if complexity, back-end coding, application programming and logics interest you, C++ can pay a decent amount of salary for sure.

Swift is useful for developing mobile applications and web applications. Apple is frequently using this language to design OS X  and iOS applications and for designing apple stores. Swift is easier to read and understand and it is unified with memory management that is why the future demands swift.

Who Should Learn Swift?

If you want to learn a language with fewer efforts and for high earning, you should learn this language. You will soon be coding iOS Applications as other Apple Programmers. The language has good market demand and pays as good as the Apple’s products and apps.

Picking the best of C and C++, Python is made. It is a very powerful language high-level programming language, capable to structure a clear small-scale program as well as large-scale programs with same ease. The auto memory management feature, along with function-oriented and object-oriented functionality, makes Python a frequently-picked choice.

Who Should Learn Python?

Ever-green, super-lengthy, super-power and platform-independent – Java still has a decade (or century?) to rule!

This general purpose object-oriented computer programming language can be compiled and run on every Java platform without recompilation. Java applications are compiled to bytecode and run at any JVM (Java virtual machine). Its maximum syntax is influenced by C and C++.

Who Should Learn Java?

The trend of the web apps has increased the demand for JavaScript. This client-side scripting language has grabbed more attention in the recent days due to the increase of JS-based frameworks. React JS, usage in LAMP development, Angular JS, VUE JS, and many other frameworks are out to appeal the industry.

Who Should Learn JavaScript?

From Web app development to front-end, JavaScript has found its applications everywhere. Probably, this is the reason behind such a varying and attractive salary range being provided for it. People, thinking to work in software engineering, web development, interface-building, and vulnerability checking domains can opt for JS.

This multi-paradigm language is not Object-oriented but can do almost everything which can be done using OO languages. GUI applications, game libraries, OpenGL application and many web projects utilize Rust. The language is competent to C++ and is fast-expanding its wings in the global IT industry.

Who Should Learn Rust?

Rust is a fun and flexible language to learn and is easy to use alongside. It is finding good applications in the industry, which has increased the demand for Rust developers. For good web and video game programming opportunities, you can choose Rust over other programming languages.

If you thinking to learn something related to Android, then you must go with Kotlin instead of java. As it runs on Java and compiles well to Java bytecode, it will be the most-used future coding language for Android OS. You can directly start tinkering with Android and Existing Java at the beginner level, by going through some Kotlin tutorials. It is used to convert Java to Kotlin by the android studio, auto-saved string templates, adding extension functions, designing android APIs, etc.

Who Should Learn Kotlin?

Google has announced that all they will soon be launching an app browser. After that, it will be essential to convert all the apps in Kotlin (if you do not want to lose your users). Looking Interesting? Trust us, Kotlin is the perfect future!

Google Go is all set to take over the market. This is a compiled language and passes the code-build-test in few seconds, which makes it more popular. It meets the challenges over multi-processor computing environment. In the few years, its market will definitely increase by 200% or more (Nothing to be surprised here!). Famous devops tools like docker,  kubernetes and terraform are written in go.

Who Should Learn Go?

GO is used in designing toolbox, documentation of browser, search engines, source indexing, analysis, and search. So, it will be beneficial for securing a good earning package by learning this language. Also, people who are into devops, this is a great language for creating small to big utilities.

We have published the best programming languages for 2017 last year

Still got queries? Nothing to worry. Ask us through commenting below because asking and getting it resolved is always better than picking the wrong career lane, agree?